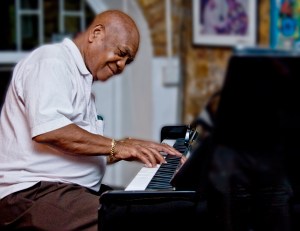 Ebe Gilkes is the icon of jazz in Barbados where he has entertained audiences for over 57 years with his exceptional virtuosity on the piano. His trio and quartet have featured at premier hotels in Barbados, and at jazz clubs, Ebe Gilkes is the pianist of choice frequently accompanying well-known American and European jazz artists. The Ebe Gilkes Quartet has performed at international jazz festivals in Barbados, Trinidad, and Capetown South Africa.

Ebe is among the last of Barbados’ jazz masters. His remberances of the Barbados jazz scene have been documented by CBC Radio (2008) and the Barbados Museum & Historical Society for the I Got Rhythm: the Story of Jazz in Barbados exhibition (2009). The Ebe Gilkes Trio opened the exhibition at an evening concert in the Museum Courtyard.

In 2010 he was awarded the Barbados Service Star for his outstanding contribution to the jazz genre. His other awards include the 1997 Barbados Music & Entertainment Award, the 1998 Barbados International Jazz Festival award, and the Barbados Tourism Authority 2003 award.

The same year, The Ebe Gilkes Trio launched their first CD with guest artist saxophonist Andre Woodvine. The launch concert was held January 14 at Frank Collymore Hall. ‘A lovely way to spend an evening’ is how Barbadian journalist Carl Moore describes  describes the event. Gilkes at FCHall (2)_by Carl Moore

Ebe continues his weekly performance schedule in Barbados at The Sandpiper Hotel and the Coral Reef Hotel, and for private affairs. seb: april 2013